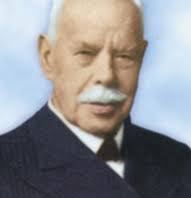 “There is nothing so real as God,” he said, “and God wants men to be as real as He is; sons of God with power. God has never made us to be imitations, never made any of us to be ordinary creatures. He wants specialities, and wants every one of us to be specialities, with souls fixed in God, and working the works of God. When God is upon the smallest person in the place, He can make us mighty, and when we are simple enough to believe Him, the whole of our lives are changed, and the things which we have merely heard about begin to be realities in our own experiences.” Smith Wigglesworth, February 16, 1922 Melbourne Town Hall. Source: http://www.smithwigglesworth.com/life/australianz1922.htm

Did Smith Wigglesworth prophesy a role for Australia in the final revival?

In 1947 Smith Wigglesworth prophesied that the Great Revival would come through a generation of believers when the Word and Spirit come together. Here is this word in its unedited form: “During the next few decades there will be two distinct moves of the Holy Spirit across the church in Great Britain. The first move will affect every church that is open to receive it and will be characterized by a restoration of the baptism and gifts of the Holy Spirit. The second move of the Holy Spirit will result in people leaving historic churches and planting new churches. In the duration of each of these moves, the people who are involved will say ‘This is the great revival’. But the Lord says ‘No, neither is this the great revival but both are steps towards it.

When the Word and the Spirit come together, there will be the biggest movement of the Holy Spirit that the nation, and indeed the world, has ever seen. It will mark the beginning of a revival that will eclipse anything that has been witnessed within these shores, even the Wesleyan and the Welsh revivals of former years. The outpouring of God’s Spirit will flow over from the UK to the mainland of Europe, and from there will begin a missionary move to the ends of the earth.”

He continued to prophesy, “I see another one. I see people of all different denominations being filled with the Holy Ghost.” That was the Charismatic Revival. God raised up people during that era, like the Full Gospel Businessmen.

Then Brother Wigglesworth continued, “I see another move of God. I see auditoriums full of people, coming with notebooks. There will be a wave of teaching on faith and healing.” We did experience that wave he saw, and we call it the Word of Faith movement.

Then he prophesied, “After that, after the third wave,” he started sobbing. “I see the last day revival that’s going to usher in the precious fruit of the earth. It will be the greatest revival this world has ever seen! It’s going to be a wave of the gifts of the Spirit. The ministry gifts will be flowing on this planet earth. I see hospitals being emptied out, and they will bring the sick to the churches where they allow the Holy Ghost to move.”

Australian Revival Prophecies by Others: