Maps can reveal many things about a place. For instance a weather may can chart rainfall and pressure systems to indicate future weather patterns. A topographical map can show watercourses and hills that allow better urban planning. A spiritual map uses historical events to indicate the sins against God in a city. We can locate the strongholds that are barriers to revival and give clues as to a city’s divine destiny.

Before 1835, in an area covering Greater Melbourne, the Dandenong Ranges, the Mornington Peninsula and Westernport Bay, there lived various tribes of Aborigines connected to each other with a similar language. Very little is known of their spiritual life except that their spirits were “one” with the spirits of the land and all that was in it. They acknowledged “Bunjil” as the life-giver eagle totem who was the creator and gave gifts to humans for living. Soon after he made men, a serpent spirit (not the Rainbow Serpent) destroyed the land and tempted man, but Bunjil rose to the sky as the wedge-tailed eagle and hovers over the land to protect his people. However in 1789 and 1830 they were decimated by smallpox epidemics travelling overland from Sydney and when Europeans arrived, it is estimated that there were only 7,000 left. The site settled by Europeans was precisely the spot most favoured for their inter-clan gatherings by the “Kulin”, the name the natives call themselves, meaning “the People”. The gatherings took place around hill sites and watercourses, such as Richmond Hill and where the Myer Music Bowl now is and were for trading and exchanging marriage partners, involving much spiritual activity. White settlement severely disrupted such activities. Much violence among natives was witnessed and even encouraged, but whether it was inherent in their culture or caused by the stress of dislocated lives is not known. They began gathering in Melbourne and Geelong as centres for food, blankets etc., many turning to drink and prostitution. As they were being massacred by individuals in the country for “trespassing” and stealing or through disease, ironically the official government position was one of curiosity, kindness and justice. On the whole, they were treated fairly by the judicial system when accused (there were many accusations), but they were never in a position to wage successful prosecutions. Eventually the care of Aborigines was placed into local government or church hands, which fed and educated them. The Wesleyan Methodists had a school in the Drysdale area and a mission outreach at Birregurra in the 1830s, long before there was a sizeable white settlement in Melbourne. A school for Aboriginal children was also established on the Merri Creek where it flows into the Yarra River. However by 1850 the native population was reduced to half of what it had been in 1835. After the goldrush period (1850-60s), Aborigines were worse off than ever. Government recognition of their plight lessened and well-meaning churches and individuals took over, saving the people’s lives at the expense of their culture. The government appointed a Protector of Aborigines who recognised the predicament they were in: keep them in their own language and culture groups and have them die out by the end of the century, or herd them together and teach them skills to live in the modern white world. As a result, they were encouraged to live at Coranderrk (meaning “Christmas Bush”) outside Healesville. A long and arduous migration is recorded from over the Great Dividing Range to Coranderrk in winter by chief Barak and his son Wonga, both of whom died many years later honoured as Christians who sustained their people through their nation’s most traumatic upheaval (i.e. white settlement). At Coranderrk they learnt weaving and tobacco-growing. They were forbidden to speak in their own languages, so English became the norm as their own tongues died out. They were now a people without foundations. Many white amateurs tried translating the Bible into existing dialects but an imperfect grasp of the language and their spiritual beliefs (e.g. “God” was translated as “Bunjil”, the eagle totem) estranged Aboriginal-white relations further and greatly hindered evangelism. By 1901 there were only 271 full-blooded Aborigines left, and almost nothing was recorded of their language for the next 60 years. There was a national government policy of assimilation: children were taken from their families and brought up as white, not always knowing their true origin till much later, resulting in many disturbed half-caste fringe dwellers. The Aborigines’ way of coping was to adopt measures of deliberate separation.

For instance:  the few native words remembered by them were incorporated liberally into their spoken English as a barrier to white comprehension.  their social occasions (marriages, birthdays, schools, etc.) were exclusively black. Whereas in other parts of Australia, de facto relationships are the norm, Melbourne Aborigines tend to marry, and marry in church. The head of the family is usually an older woman, because the fathers don’t exert authority and have little to do with child-rearing. By 1982, a third of Victoria’s Aboriginal population lived in Melbourne. Most Melburnians are unaware that there are Aboriginal people in Melbourne (about 7,000 in a city of 4 million). They live mainly in Healesville, St Kilda, Dandenong and the poorer northern suburbs. There is now more help from Federal government, e.g. small moves in Healesville to return land, schools tailoring their curriculum to their Aboriginal student population, and less patronising academic attitudes resurrecting research into languages and culture. 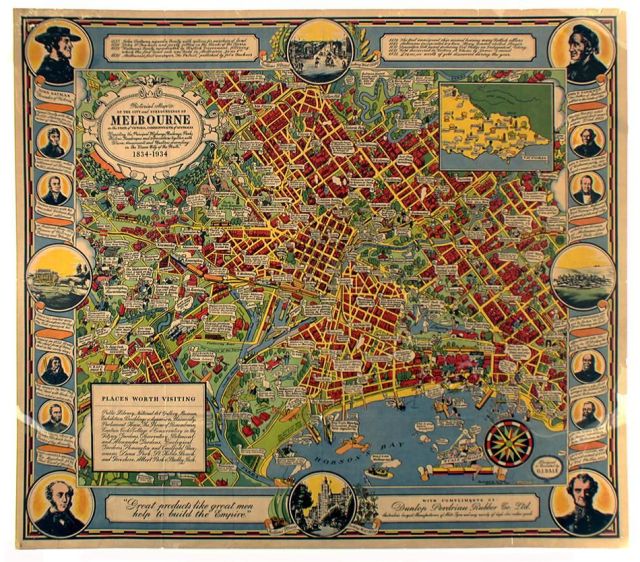 2. Establishment of Melbourne Prior to 1835, there had been a few aborted attempts by European to settle in the Port Phillip area, but the first permanent settlement began with the discovery of two rivers, the Yarra and the Maribyrnong, flowing into the bay. It is an ideal port city, having access to fresh water and the sea, though the bay of Port Phillip is extremely shallow in places. Many Tasmanian settlers were looking for fresh pasturage for their sheep and cattle and the fertile land and water supply of Melbourne and its hinterland was so attractive that in 1835, John Batman and John Pascoe Fawkner sailed from Launceston and exchanged some blankets, knives, flour, handkerchiefs, mirrors, etc. for 245,000 hectares of land with the local natives. Although he ruling government (of NSW) officially cancelled this transaction because it was illegal, so many Europeans came to take up land that the government was forced to admit the legitimacy of the settlement and in 1836, a few soldiers and convicts were sent with a surveyor and other officials. The surveyor, Robert Hoddle, named the newly laid streets after the Royal Family and resident colonists, while the Aborigines were still living on the site.

3. How Melbourne describes itself

4. Principles of government establishment Melbourne was founded by individual enterprise.

Many initiatives backed by private funds have been birthed in Melbourne.

Before the goldrush there were 23,000 Europeans in Melbourne and by 1846 it had been declared a city. Serving a farming hinterland, Melbourne was a place of factories, shops and small industry. Conflicts often occurred in the workplaces, the origins of future private enterprise/working class clashes. The relationships in society were primarily economic, emanating from private ownership of property and its control over education, religion, entertainment, etc. In other words, many churches, schools, newspapers and mechanics’ institutes were founded by the wealthy as a means of controlling the labouring classes.

In 1851 gold was discovered in NSW and Victoria, with the Victorian goldfields yielding by far the richest deposits. Geelong advertised its deep port as a suitable place for disembarkation but Melbourne officials convinced the authorities with distorted maps to choose Port Melbourne instead. Geelong has suffered economically ever since, resulting in strong resentment. Though there has been recent economic investment in Geelong, it still continues to suffer hardship in industry and manufacturing. The influx of gold diggers was so great—the population trebled in three years—that Victoria was made a separate colony only three years after gaining independence from NSW and the transportation of convicts was stopped. By 1861, Melbourne’s population had swelled to 130,000, making it Australia’s largest city for the next 30 years. The mix of people at the goldfields (who subsequently returned to Melbourne to bank their finds and settle) was such as to level out most class and race distinctions, except for the large population of Chinese who were regarded with suspicion and hostility, even though they established what has become the longest continuously occupied Chinese settlement in the Western world (in Little Bourke Street). The constitution set up for the new state government was, at the time, considered to be an incorrupt, wise and fair one. John Pascoe Fawkner, one of the city’s founders and an active member of the Congregational Church, was in the first state government.

In the time that Australia was first colonised to the beginnings of settlement in Melbourne, the evangelical wing of the Church of England had gained prominent political power, due to being instrumental in the abolition of the slave trade in the UK. From when Sydney was founded to when Melbourne was settled, there had been the French Revolution, the Napoleonic Wars and riots due to increased mechanisation and poor harvests. The British Government and churches now recognised a responsibility towards social welfare. The evangelicals looked for a new focus: the plight of native peoples in colonised lands was one issue that came to its attention.

7. Greed in the economic system

The Victorian goldfields, and Melbourne, were seen as get-rich-quick places. Melbourne was the financial capital of Australia from 1850 to the 1970s. The architecture of Melbourne was opulent, a city to impress with its wealth. In the 1880s it was the 2nd biggest city in the British Empire. However in the 1890s there was a big economic slump triggered by a run on finance in Melbourne, reputedly worse than the 1930 Depression. Sydney then became Australia’s largest city. Melbourne’s population numbers did not catch up until the beginning of the 21st century. In the late 1980s there was another worldwide economic recession. Due to the greed of certain directors and the incompetence or unwillingness of the state government at the time, the State Bank and the Pyramid Building Society (based in Geelong) collapsed, leaving 100,000s of people financially stranded at a time when many people were unemployed. Melbourne’s small business and manufacturing base was adversely affected. State governments now prefer to underpin Victoria’s economy with profits from the Casino, the Grand Prix and big events like the Grand Prix and the Commonwealth Games (2006). Melbourne’s economy is strongest in finance, manufacturing, research, IT, education, logistics, transportation and tourism. Melbourne employs one third of the continent’s ICT workforce. In 2008 Melbourne earned more money than Sydney from tourism. It is headquarters to 5 out to 10 of Australia’s largest companies based on revenue, 4 out of 6 companies based on market capitalisation including the world’s largest mining company (BHP Billiton), and two of the “Big Four” banks (NAB and ANZ). It is the leading centre for superannuation (pension) and industry super funds. As the centre of Australian industry, it has the automotive headquarters and design centres. CSL, one of the world’s top biotech companies, and Sigma Pharmaceuticals are also headquartered here: they are Australia’s largest listed pharmaceutical companies. Conclusion God’s redemptive purpose for Melbourne: a non-racist environment for all ethnic groups, a land of wealth and abundance, a place of initiative and enterprise, a city where churches are united. Suzette Hattingh (1997): Is 60:1, “Arise, shine for your light has come” – a light to the nations. Barriers to Revival: Strongholds National: convict legacy debt to Aborigines: restoration of health, families, language, land Melbourne: controlling government greed for money racism against Asians spiritual pride of churches