Why is the 100 Year Anniversary of the Light Horse Charge on Beer Sheva so relevant now to Aussies and Israel?

See ways you can participate on Tues 31st Oct & Sat 4 Nov BELOW and at WHAT’S ON.

On Tues 31 October 2017 we are not just commemorating the 100th Anniversary of the Australian Light Horse Charge at Beer Sheva on 31 October 1917 – we are uniting to fulfil our spiritual destiny! We Aussies have a Breakthrough Anointing that will carry the knowledge of the glory of God to all the earth if we arise at this crucial time and say “Yes” to who we are called to be!

The Turkish troops were unnerved when they recognised the Aussies by the emu feathers in their akubra’s and heard the Light Horsemen, including Indigenous Australians, charge with wild yelling, laughter and coo-eeing. “Cooee” can be heard across great distances. It is an Aboriginal call meaning “come here or come home in the Dharug language of people from the Sydney area. Cooee is an Aussie call – associated with calling the lost home. We recognise its historical and spiritual authority. As a direct result of the Beer Sheva charge – Israel was able to return home.  The Aussie Breakthrough Anointing helped fulfill the promise in Ezekial 39:27 but 100 years later we need to arise again in the Breakthrough Anointing to see an outpouring of the Spirit of God so Israel, and the nations, know Yeshua as their Messiah!

“… when I have brought them back from the peoples and gathered them from their enemies’ lands, and through them have vindicated my holiness in the sight of many nations. Then they shall know that I am the Lord their God, because I sent them into exile among the nations and then assembled them into their own land. I will leave none of them remaining among the nations anymore. And I will not hide my face anymore from them, when I pour out my Spirit upon the house of Israel, declares the Lord God.” Ezekial 39:27-29.

“For the earth will be filled with the knowledge of the glory of the Lord as the waters cover the sea.“ Habakkuk 2:14

“And this gospel of the kingdom will be proclaimed throughout the whole world as a testimony to all nations, and then the end will come.” Matthew 24:14

Two Musters YOU Can Join:

1. 4.30pm Eastern Standard Summer Time on Tuesday 31st October 2017. Gather your church and local community at the WWI memorials in your suburb or town to shout, “Coo-ee” on the  100th Anniversary of the Beer Sheva charge. They will be proclaiming “Coo-ee” in Beer Sheva at the same time! We are Aussies and we carry God’s Breakthrough Anointing! Let’s arise in united spiritual formation in 2017 to proclaim the breakthrough for Israel, Australia and the nations! Let your “Cooee” pierce the spiritual atmosphere like a trumpet – like the Shofar! Call the lost home! Call Israel to recognise their Messiah! The waters from Abraham’s well at Beer Sheva will bless the earth. (Genesis 26:3-5, 23-33)

2. 11am Saturday 4 November in Canberra. We invite you to pray for and support the Great Southland Unity Ride – 600km from Pilliga into Canberra 31 October- 4 November 2017! Pray for Spiritual Breakthrough for our Government and Federation!

The Great Southland Unity Ride is a call released by Bill Towns  (pictured above). Bill was led by the Holy Spirit to ride across Australia from West to East. www.40stories.com.au

Now God is using Bill to call all Australians to arise! Horsemen and horsewomen carrying the Australian and the Aboriginal flags will leave the Pilliga bore baths on the 13th October 2017. You can accompany them in vehicles or meet them when they arrive at EPIC Arena Canberra on the 3rd November for celebrations on Saturday 4th November at 11.00 am. This will include a parade of all flags of the nations that call Australia home, carried on horseback and foot and a picnic; and entertainment on the arena stage.

The purposes of the Ride are:

1. To encourage peace and unity for the love of God and each other, by leading the way for our children and their children’s future;

2. To come together in gratitude, peace and acceptance, laying down differences and promoting togetherness.

3. To honour each other, our Christian heritage and the Australian way of life, which includes all people, beliefs and cultures. 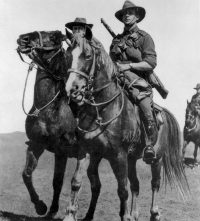 Come and Join Us!

You can join the Unity Ride even for one kilometre, on skateboard, 4WD etc!
You can cheer them on from the sidelines and pray for them & support them.
You can be in Canberra to meet them when they arrive at EPIC Arena Canberra on the 3rd November for celebrations on Saturday the 4th November at 11.00 am when they ride in carrying the flags of all nations. There will be ceremony, picnics and music. See the fully expressed goals – for peace, unity, love of God, harmony and honour.

There are many elements to be planned so we would be grateful if there is any preparatory assistance you can give – as God leads. By all means give Bill a call on 0458 477 773 or email him at unityride1@gmail.com

Let’s rally to this call as the body of Christ and Australians!