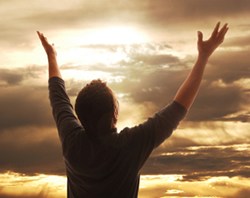 This prayer inspires us with the power of Christ in a slave who was kidnapped at age 14, by human traffickers, and shipped to Ireland. Patrick (387-461 AD) met God and cultivated a life of prayer during 6 years tending sheep on harsh isolated mountainsides. Supernatural encounters with God led him to escape Ireland and then return as a missionary. In his life time Patrick saw his adopted homeland convert from paganism to Presence filled Christianity.

I arise today
Through a mighty strength, the invocation of the Trinity
Through belief in the threeness,
Through confession of the oneness
Of the Creator of Creation.

I arise today
Through the strength of the love of the Cherubim,
In obedience of angels
In the service of archangels,

In hope of resurrection to meet with reward
In prayers of patriarchs
In predictions of prophets,
In preaching of apostles,
In faith of confessors,
In innocense of holy virgins,
In deeds of righteous men.

I arise today
Through the strength of heaven:
Light of sun,
Radiance of moon,
Splendour of fire,
Speed of lightning,
Depth of sea,
Stability of earth,
Firmess of rock.

I arise today
Through God’s strength to pilot me:
God’s might to uphold me,
God’s wisdom to guide me,
God’s eye to look before me,
God’s word to speak for me,
God’s hand to guard me,
God’s way to lie before me,
God’s host to save me
From snares of devils,
From temptations of vices,
From everyone who shall wish me ill,
Afar and anear,
Alone and in multitude.

I summon today all these powers between me and those evils,
Against every cruel merciless power that may oppose my body and soul
Against incantations of false prophets,
Against black laws of pagandom,
Against false laws of heretics,
Against crafts of idolatry,
Against spells of wiches and smith and wizards,
Against every knowledge that corrupt a man’s body and soul.

I arise today
Through a mighty strength, the invocation of the Trinity
Through belief in the threeness,
Through confession of the oneness
Of the Creator of Creation.

” Characteristics of its language would assign it to the seventh, or even to the eighth, century. On the other hand, it is Patrician to its core, the first ringing assertion that the universe itself is the Great Sacrament, magically designed by its loving Creator to bless and succor human beings…. If Patrick did not write it (at least in its curent form), it surely takes its inspiration from him. For in this cosmic incantation, the inarticulate outcast who wept for slaves, aided commen men in difficulty, and loved sunrise and sea at last finds his voice. Appropriately it is an Irish voice.”

p116 Thomas Cahill, How the Irish Saved Civilization: The untold story of Ireland’s role from the fall of Rome to rise of Medieval Europe.