Rosy’s Pool Hall: A Story of Intercession and Neighbourhood Transformation 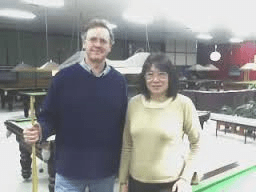 This story begins in 1999 when Rosy Soh started a pool hall as a street ministry in the heart of one of Melbourne’s worst drug scenes, at 122 Springvale Rd, Springvale – near the Springvale rail station in Melbourne, Australia.

In the process of setting up the pool hall, Rosy received the following vision…
Rosy was standing on a wall dividing two pools of water. One pool was putrid with dead fish and the other fresh with live fish. As she stood on the dividing wall she began to weep. As her tears landed on the wall it started to dissolve and the living water stated to flow into the putrid water. As it did so the putrid water was refreshed and the fish started to live.
This picture is similar to Ezekiel 47, which was an expression of our Lord’s deep compassion for lives being lost to death and destruction. As the living water flowed into the dead sea, healing and life came to that which was lost (Ezekiel 47:8-12).

This was Rosy’s call to intercede for the drug culture of Springvale. On many occasions she stood in her pool hall looking out through a large glass window to the other side of Springvale Road, where a major drug centre was operating. She wept in the Spirit for hours at a time for these drug pushers and users. When high level pushers came into her pool hall with their body guards she went up to them and told them she ran a Christian pool hall… no drugs, no alcohol, no smoking, just a clean fun alternative for young people. She even had a word from God for the pushers: “What good will it be for a man if he gains the whole world, yet forfeits his soul?”

When the Government decided to put injecting rooms into Springvale, Rosy went to the public  meeting to explain to the residents how this was to be accomplished. Injecting rooms were “man’s answer” to drug addiction… but this was not what God had in mind! Rosy went to the meeting under the anointing of the Holy Spirit. She spoke out against injecting rooms. The plan never went ahead. The next day the papers rang her to ask her what she had said that would cause the Government’s to change it’s mind. Rosy can’t remember the specifics of how God spoke through her at that meeting. She was just available to Him.

What was God’s answer for Springvale?… intercession! The tears of the river of life from a compassionate and Spirit filled woman flowed for the souls of the lost in Springvale.

Now the drug dealers have gone. The main shop where drugs were pushed was taken over by a retired missionary and revamped as a Christian drop-in centre. New churches migrated into the area. Drug addicts stopped coming from all over Melbourne to Springvale. The city has been largely cleaned up and it’s safe to walk the streets of Springvale again.

“Subsequently,  I had attended a meeting of  Intercessors for Melbourne. At this meeting one of the intercessors said: “I can see a vision of two pools of water, one fresh and the other putrid. The water from the fresh pool is flowing into the putrid water and bringing new life”. The lady speaking had no knowledge of Rosy Soh’s story, so I knew I had to fill in the gaps. The intercessors were moved to tears. They had been praying for the situation in Springvale but had no knowledge of how God had moved. Praise God for intercessors moving in obedience and accuracy under the guidance of the Holy Spirit!”

Fifteen years later the atmosphere around the Springvale Station has changed, and it is no longer known for being the hub for heroin distribution in Melbourne.

In 2011, the Church of Christ Stirling Bible College launched a University Campus 200 meters south from where the outreach café had begun in 1999.

Thank God for you Rosy Soh and your team!

One Response to Rosy’s Pool Hall: A Story of Intercession and Neighbourhood Transformation